Police Decision Making: Science, Policy and Practice for the Use of Deadly Force

Once the proverbial "pull the trigger" decision is made either to let out a Verbal Volley or Fire a Single Shot, it is almost impossible to apply the brakes. The outcome resulting from this could be a frayed relationship with a colleague at work or a loss of life on the streets during police work.

The last one was seen recently with the police shooting in Ferguson, Missouri, where Officer Darren Wilson fatally shot and killed 18-year old, Michael Brown -- in addition to the precious loss of life of a young man, there were repercussions from riots to citizens' loss of confidence in the police itself.

Research in evolutionary psychology and cognitive science show the underlying reasons as to why we humans act in a preemptive manner (use force), particularly when life and limb are at stake, even before all the facts are ascertained. They are:
The simplest way to describe the above is by analyzing the structure of the human brain. Our brain carries the baggage of our evolutionary history, from the time we evolved from reptiles to small mammals and eventually the primates that we are today (homosapiens: Latin for "Wise Man" or "Thinking Man"!). This is revealed in the structure of our triune (3-layered) brain, where the reptilian brain is at the lowest, followed by the Intermediate brain at the next higher level, and the Rational Brain at the highest level. 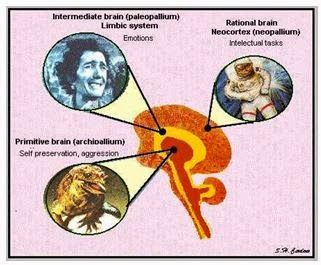 Our base instincts pertaining to self preservation and aggression (including quenching hunger, sexual drive, bowel and bladder functions), are largely governed by the primitive or reptilian brain. Whereas mental processes that concern higher-order thinking and symbolic manipulation, say, composing music or reading a map, operate in the rational brain.

So in other words, we the homosapiens, the supposed "Wise Man" are not really WISE when it is to do with  decision making when survival or self preservation are at stake.

Furthermore, when it is a matter of survival, we would rather assume that the perceived threat is true (or a positive), in the spur of the moment, even if turns out to be false after examination or later reflection.

Why?  It is better to be wrong than to be sorry (after the fact, say, injury or death).

Evolutionary psychologists call it the "Snake in the Grass Effect." For example, if we were walking in the woods and get a feeling that something is rubbing on our shin, our non-conscious, reptilian brain makes us jump back even before we get a chance to determine the source for that feeling. Later examination might reveal that we just happened to rub our shin on the bark of a tree giving us that "scaly feeling"! Thus, the "Snake in the Grass Effect."

If in reality that "scaly feeling" turned out to be a tree bark that caused us to jump back in alarm, then, it was a false positive; however, regardless of the error, we have not lost a thing. Perhaps our heart rate and stress hormones levels momentarily elevated due to the hardwired flee or fight response. On the other hand, what it if that "scaly feeling" really happened to be snake? And it is quite possible that on that rare occasion, it might have well turn out to be a real rattle snake with scales! (True Positive). Jumping back in alarm, may actually have helped us survive!

Snake in the Grass Effect

How does all this play into policing and decision making?

Police officers are human, too, and succumb to the same decision making processes described above that are governed by the reptilian brain and false positives (snake in the grass effect). Furthermore, their decision making maybe affected due to implicit biases when a suspected person belongs to another racial or ethnic category. Alas, that is how the brain is wired given its evolutionary history.

BUT, this is no excuse for police officers to open fire on innocent citizens. To prevent this, police departments have policies such as Use of Force Continuum (picture below), as to when the use force is appropriate and, thus, can be escalated. (A recent addition are body-worn cameras to deter the officer from unwarranted use of force.) 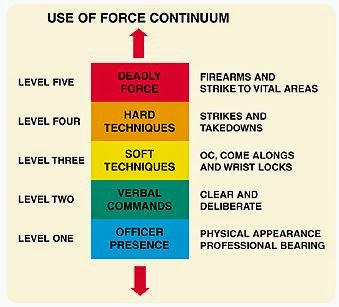 The classic definition for the philosophy of policing, which drives much of training and policing practice in the US is informed by the scholar Egon Bittner's (1985) classic paper*. He observed:


"The police are best understood as a mechanism for distributing nonnegotiable coercive force in accordance with an intuitive grasp of situational threats to social order. This definition of the police role presents a difficult moral problem; setting the terms by which a society dedicated to peace can institutionalize the exercise of force...."

But how does a police officer, in high stakes situations, get an intuitive grasp of situation threats? And how does one prevent false positives, particularly when transitioning from Level Four use of force to Level Five. And, in practical terms, under stressful situations, when danger-induced emotional arousal (reptilian brain), drives much of cognition, is it even possible to recall the Use of Force Continuum?

These questions need to be asked and researched and solutions developed by taking a multi-pronged approach in the following areas:
Before I conclude this article, I want us to consider a hypothetical question, which is both daring and crazy at once, a heresy even to utter in the context of policing in the United States:


Would having unarmed police officers conduct community policing reduce the TOTAL number of unwarranted killings -- loss of lives -- of both Citizens and Police Officers?

I am not sure what the answer would be. Because, it is unacceptable for any loss of innocent life, be that of an officer or a citizen.

But by asking the above question, I raise a plausible solution (pointers, really) in terms of officer recruitment, training, police comms. & computing technology and policy.  Because from a human factors standpoint an unarmed police officer should have built-up extraordinary abilities to diffuse a situation, without the use of force.  In other words, our hypothetical unarmed police officer needs to have the following:
All of the above, in my opinion, can contribute in the officer maintaining the locus of control and confidence. (Often times, it is a loss of confidence or fear, which leads to pulling the trigger.)


The take-away message is policing requires men and women with extraordinary capabilities and skillsets in multiple dimensions. They not only need physical strength, but also wit and wisdom on the fly. In other words, they need to be real HOMOSAPIENS, a.k.a., "the Wise Man" that we are capable of being when our rational brain is operational. What can and should be done by policy makers, researchers, recruiters, trainers, commanders, and actual policing practice, so that we have "wise men and women" police officers on the ground? And, more importantly, can it be realized in policing culture and practice quickly enough to prevent the next Ferguson?

About the author:
Moin Rahman, is a Principal Scientist at HVHF Sciences, LLC. He specializes in: