Performing any task under time pressure, leave alone high stakes, is hard enough. It gets harder when one is a driver; say, driving on a crowded freeway to the airport when we are running late to catch a flight.

Now let us switch roles and imagine that we are driving a first responder vehicle, a fire truck or an ambulance to the airport, in response to a major fire. Where initial reports suggest that many are seriously injured, which includes a few fatalities whose number might grow if the situation is not brought under control.  Needless to say, the sooner we get to the airport, more the lives that can be saved.

As an emergency responder our drive to the airport is filled with the percussive blare of the sirens wailing, lights flashing; including, a variety of in-vehicle radio communications (voice and data), which provide continuous updates to us, on issues ranging from coordination to what to expect on the scene. So that we are mentally, physically and organizationally prepared when we arrive on the scene.

An emergency response driver may have to participate in these communications as s/he must build a mental model of the unfolding emergency situation. He does this when driving at or above the speed limit, and deftly maneuvering the vehicle, through heavy traffic. Stated otherwise, the emergency vehicle driver's situational awareness of the road, traffic conditions and heading (navigation) should be above the norm to avoid collisions or getting lost -- which only delay the emergency response.

Distraction takes on an entirely different meaning when you compare the citizen-driver with that of the emergency vehicle driver.  However, you would be surprised to hear that for all the attention "distracted driving" has received with regards to the citizen / consumer car (texting, cell phones, etc.), the emergency vehicle has received little attention, if any, in research, design & engineering and the popular press.

The current approach to designing the emergency vehicle, be it a fire truck or a police car, is simply to pack it with more and more technology (2-way radios; data terminals; lights & siren controls; etc., etc.). Furthermore, in most cases, general consumer vehicles conceptualized and designed with very different goals, have been adapted (retrofitted) with emergency responder vehicle technology. It is akin to taking a pleasure yacht -- then stripping and retrofitting it with suitable technology and offensive capabilities -- to turn it into a navy frigate. (see below).


Much needs to be done in the design of emergency responder vehicles. Just adding (literally) bells & whistles won't do.  They under serve the emergency responder due to poor ground-up human engineering and top-down human-system integration of technology within and without the vehicle -- compromising safety for all concerned.

Driver Distraction due to onboard technologies -- voice calls or text messaging on cellphones being the most ubiquitous culprit of our times -- has received widespread attention both in academic research and the popular media.  It is a very serious topic because a distracted driver can inflict great harm to him or herself, and others on the road.  Cell phones aside, there are many other interactions (and distractions) due to onboard technology, e.g., the entertainment system, navigation device, HVAC -- and other non-technology-related activities (eating to rubbernecking).

This is in the consumer world. But let us now dive deeper into the world of emergency responders.

Emergency vehicles are driven by the need to deliver a quick response at the site of the incident or accident and/or transport injured people to the appropriate emergency medicine or trauma center. Public safety personnel (law enforcement, firefighting or EMS) who are charged with the delivery of on-scene, first line of response have to arrive in the shortest possible duration without compromising either their safety or that of citizens or property.  To accomplish this, first responders or emergency responders utilize various surface transportation modes (e.g., police car, motorbike, fire truck, ambulance).  More often than not, the emergency responder may also assume the role of the driver (a.k.a., EVO: Emergency Vehicle Operator); The EVO has to communicate, coordinate, collaborate, navigate and signal (C3nS), to enable him/her to arrive at the right location; and develop the correct mental model and situation awareness a priori to enable him/her deliver the appropriate response.  Thus the visuo-spatial-cognitive demands placed on the EVO, due to the primary task of high velocity, tactical driving and high priority, secondary tasks (C3nS) that must get done on the move, can be overwhelming due to the following reasons: 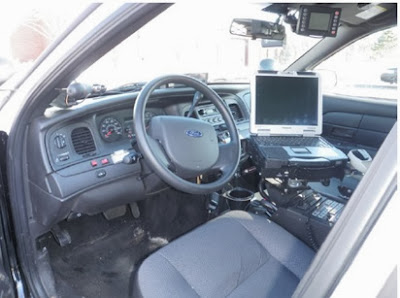 Nevertheless, the issue of injuries and fatalities resulting due to emergency vehicle crashes has been recognized and has been reported (FEMA, 2004; USFA, 2011). Driver distraction and human factor elements of emergency vehicle operations have been recognized (FEMA, 2004; IAFC, et al., 2010) as safety issues and guidelines (policies & procedures) have been published.   No literature that report findings on driver distraction caused by in-vehicle emergency responder technologies – basic or applied research (simulator or naturalistic driving) – to my knowledge is available in the public domain. However, a recent initiative by the United States Fire Administration (USFA, 2011) was announced to initiate a public safety emergency vehicle study.

Emergency responders differ from the general public drivers in a number of ways, given their overarching goal of arriving at the scene or transporting the patient to the hospital in the shortest possible duration; or in some cases, embarking on hot pursuits (law enforcement). These cognitive and behavioral differences, as it applies to the in-vehicle experience and driving, are listed below:

Consider fire trucks. Pumpers, ladders, rescuers and tanker trucks are highly customized creations for the Fire Department from an operational standpoint. A truck maybe fitted with a 2000 gallon tank or with a pump capable of delivering 500 GPM.  But scant attention is likely to have been paid to the in-vehicle technologies the crew and the driver have to interact with enroute to an incident. Same applies to a police car.  The communicate, coordinate, collaborate, navigate and signal (C3nS) capabilities might have just been retrofitted. Driver distraction, human factors and social intra- and inter-crew(s) interfacing, during a mission within and between first responder agencies may not have been addressed at all.

The RD&E must move away from the current retrofitting paradigm of civilian vehicles. This neither serves the emergency responders, citizens nor industry as it compromises safety and results in poor efficiencies. From a business standpoint, the incentives are lacking for industry -- automobile manufacturers to emergency communication vendors -- to change this paradigm.

As a first step, mobile radio and computing technologies that are currently being retrofitted into a range of vehicles should stop taking the one-size fits all approach. Their design should be considered from the standpoint of what they need to do -- and assist EVOs and first responders in transit -- from an emergency communication and information transaction standpoint without causing "cognitive distractions" (taking the mind off the road and/or other higher priority tasks pertaining to driving and navigation.) Next, their user-interface design should go beyond run-of-the-mill ergonomics -- such as where to place knobs, size of push buttons or graphics of the screen -- but should also consider the cognitive, social and affective aspect of interaction brought about by high velocity human factors / HVHF (stress-induced emotional modulation of cognitive and perceptual capabilities of the body and the brain).

Ultimately, creative business models, public-private partnerships, and human factors standards and guidelines are required to design emergency vehicles ground-up that deliver unrivalled safety and utility. This is contrast to the piecemeal and ad hoc retrofitting of consumer or commercial vehicles that is done today to transform them into emergency responder vehicles.

Moin Rahman is a Principal Scientist at HVHF Sciences, LLC. He specializes in: