In this post, I will go out on a limb and make the audacious claim that the first and, thus far, the biggest "bottom-up" creative disruptor in mission critical communications industry (a.k.a., First Responder communications) has been the elimination of the "runner." That is, the messenger who relayed messages between the command post and the front lines. Legend has it that the most famous runner of all time was Pheidippides who ran from the battlefield of Marathon to Athens, in 490 BC, to relay the message that the Persians were defeated.

Then came the mother of all "creative disruptions" insofar mission critical communications were concerned: Wireless communication.

Thanks to the 2-way radio. The job of the Runner has become obsolete and "marathon" has turned into a competitive sport. But it took a tragedy concerning "Public Safety" --  a lack of, and poor, radio communication capabilities on the high seas, which resulted in the sinking of the Titanic -- for the first major federal legislation concerning wireless communications to be enacted into law. It was the Radio Act of 1912. And, public safety, has never been the same since (for the better).  However, it was the impetus of WWII and the realization by the US Signal Corps on the importance of portable radio communications for the dismounted soldier, which resulted in the commercialization of the first generation of handheld portable radios. 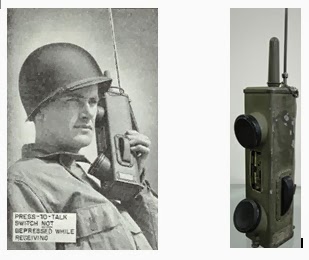 Handie-Talkie (SCR-536) military radio - circa 1945 – the first model of a hand held two-way radio ever produced.
(manufacturer was Galvin Manufacturing which became Motorola during WWII)

Success in mission critical domains (first responders, transportation, energy generation, healthcare, etc.) is contingent on timely transmission, receipt and comprehension of mission-relevant information. This could range from runner-based relayed communication, semaphores (hand signals), smoke signals to wireless radio communication (voice, data or homing signal); the latter is invaluable because of its lightening speed. Radio communication not only saves lives, it also serves as a"force-multiplier" as it enhances the effectiveness and efficiency of work done and services delivered by first responders.

I define a bottom-up creative disruption as one where the fundamental nature of how work ought to be performed -- to make it safer, cleaner, efficient and effective with multifold gains -- is realized with a game changing technology. Wireless radio communication was certainly one such game changing technology for mission critical professionals. In fact, it was such a revolutionary technology it found its way into the consumer market, and its cousin, the cellular phone, became a wild success.

Now to top-down innovations.  These are mostly small, but very much necessary, incremental changes that make a technology better. In the two-way radio case, those familiar with industry jargon, will point out such innovations: conventional to trunking; analog to digital; single to multiband; Simulcast; interoperability between different vendor equipment (APCO P25 Standard); etc. Many of these top-down innovations were necessitated to exploit the extremely valuable and crowded Radio Frequency (RF) spectrum -- and also to deliver some benefits to first responders in the field.

In a similar vein, the consumer cellular phone has seen many such top-down innovations (FDMA, CDMA, TDMA, GPRS, 3GPP, 4G LTE), but has also vastly benefited from a number of bottom-up creative disruptors. These range from color screens, multi-touch user-interfaces, speech recognition, location-based services, GPS, Internet and an "app" rich ecosystem,  and much more. A good number of these were driven by the need to meet the end-users wants and needs; and/or out think the consumers themselves to provide them with services they could not have imagined. For instance, it is said the legendary former Apple CEO, the late Steve Jobs, could imagine and intuit what the (consumer) end-users' digital interests and pursuits would be or should be, even though they (customers) wouldn't know it until the they experienced it! In the consumer space, an open market and intense competition, resulted in many bottom-up creative disruptions. Thanks to titans, past and present, such as Motorola, Nokia, Blackberry, Apple, Samsung, among others.


Have Mission Critical Communications withered on the Vine?

For some, the above question is a heresy. How dare one ask such a question...? But have we seen the kind of user-based, bottom-up creative disruptions in the mission critical communications industry that are on par with the consumer communication market? The basic anatomy of the mission critical radio has pretty much remained the same over the years. The user-experience has not really become intuitive and user-friendly, particularly under High Velocity Human Factors (HVHF) conditions -- say, in a high stakes, dangerous and highly stressful situations. (In HVHF states the user's cognitive capacity is diminished due to task overload and other threats; there is insufficient cognitive bandwidth to interact with technology.)

At the end of the day when there is a loss of life and/or assets, the fire fighter or the police officer is blamed because he didn't know how to get to the tactical talk net (group or channel). Or the buck is passed around and "lack of training" gets blamed. But what about the root cause: the design of the portable communication radio or the network that supports it? Some daring visionaries, from industry, regulatory bodies, and first responders agencies, have thought about it, and have tried hard to improve the utility of the radio, but for any number of reasons have been stymied.

These critical radio problems (device and network infrastructure) were brought into the limelight in two recent incidents that ended in loss of life: the Navy yard shooting and the Yarnell Hill wildland fire.

It is important to note that adding a color display and making bigger, bulkier knobs or best-in-class Push-to-Talk buttons with a "sweet spot" to a mission critical radio does not solve the kind of problem that confront the first responder. Certainly, they make the specific I/O interface easier to look, twiddle or press.  But what is the point of making a fundamentally unintuitive product that lacks critical utility when that ability to communicate is lost in critical moments? The reasons could range from lack of connectivity to the inability to figure out -- particularly, under highly stressful situations when the ability to think is altered due to danger -- on how to get to the right channel on the radio. Or stated in operational terms get to the the closest fellow first responder, with the appropriate skill set, say, a paramedic, from one's own team or another department.  Remember "moments" time matters in first response. A severe arterial bleed could take a life in a matter of less than 5 minutes. Bluntly stated showroom usability of buttons and knobs does not necessarily equal to actual utility delivered on the fireground, or when taking fire in a SWAT operation.

Thus one is forced to conclude that mission critical communication technology lags and not leads, both in absolute and relative terms (compared to consumer comms.), in terms of what ought to be done. For one, no noteworthy innovation that was born in the mission critical space has gone to the consumer markets in the recent past. Whereas innovations from the consumer space (e.g., Google Glass) are knocking at the doors of mission critical. There are many reasons for the paucity of innovation in the mission critical space. They range from poor economies of scale, lack of viable business models, insufficient or skewed competition, insufficient hardcore human factors engineering related R&D due to lack of a vision or funding, absence of a strong partnership among first responder agencies/end-users, vendors and regulatory bodies, among others. (Recently Politico alleged about special interests trying to impede the proposed Public Safety Broadband Network.)

The need of the hour in mission critical communications is not so much about getting the police officer an iPad or a Google Glass. They may have a role, assuming they are not distractors but truly deliver utility during normal and abnormal situations.

What really should matter, as a first step, is a thorough understanding of how first responder work is best done before we think of "engineering" a solution. In many instances, first responder work is done inefficiently or dangerously either to compensate for the limits of technology or inspite of it. To understand the "socio-technical" aspects of a firefighter, paramedic or police officers work one needs cognitive ethnographers, social and human factors researchers study their work in real time, in the field -- and in context. (Questionnaires or focus groups should be used to support field work not as substitutions; by themselves questionnaires reveal very little.) This type of work is done by teaming-up with first responders (the actual end-users and not purchasing decision makers in first responder agencies) and including them in "participatory" design exercises.

At a high level, one needs to understand the following factors, their interplay, and how goal driven tasks are best accomplished.
Data collection from the above described field work, followed by interpretation and ideation should drive the discovery of solutions. The solutions could range from training, technology, organizational factors to operating procedures. In other words, technology is one among other factors.

Insofar technology is concerned it may or may not involve using or adapting commercially off the shelf technologies; or it may require something new to be invented resulting in a creative disruption.  Such an approach, would increase efficiency of first response and protect first responders. For example, a firefighter should be made aware before he enters the building whether he would be losing his ability to communicate (transmit and/or receive). Simply put, an inability to receive a command to evacuate may have life threatening consequences.  There are several more such issues (known and unknown) that hobble first responder communications and put them into danger. Unfortunately, these problems can neither be solved with a bigger, better ergonomic knob nor the world's best push-to-talk button; or for that matter augmented reality afforded by a head mounted display such as Google Glass.

So what needs to be done? Part of the answer lies in product design (bottom-up, creative disruptions and top-down innovation). But is there an impetus or an incentive for creative disruption in the mission critical industry market vertical?: yes and no. I will reserve this discussion for another article.

In the meantime, I solicit feedback, and would like to hear your thoughts on the state of the art of mission critical communication.

Moin Rahman is a Principal Scientist at HVHF Sciences, LLC. He specializes in: