A recent study (1a,b) has rekindled an old debate regarding the true utility and safety of driver interaction with on-board, hands-free -- but voice-based interactive -- technology in a car (e.g., technologies such as a hands-free cellphone or other voice activated apps pertaining to in-vehicle Internet browsing/texting/e-mail, infotainement, GPS, etc.). Remember multitasking is not necessarily natural for a human (driver) due to competing demands, two or more concurrent tasks place on one's perceptual, cognitive and motor resources. Not all concurrent tasks are similar to walking and chewing gum. In some cases, a single task, all by itself -- for example, driving in heavy traffic and simultaneously trying to locate a street intersection in a new town -- is not easy. (The concurrent demands affects many multitasking 'tasks,' but not all. There are exceptions, where it may not have significant affects; cf. Wickens' multiple resource theory.)

When it comes to driving, the old saw "eyes-on-the-road, hands-on-the-wheel" will suffice to promote safe driving has been questioned over the last decade by both driving simulator and naturalistic driving (real time, on real roads) studies.

The most recent study from the AAA Foundation for Traffic Safety (1), argues (supported with empirical results) that "Mind-on-the-Road" (having NO other external or in-vehicle 'cognitive distraction'; e.g., rubber necking caused by an emotionally arousing stimuli on the road such as a gruesome accident or talking on a hands-free cellphone, respectively) is equally important for safe driving. However, human factors studies have produced conflicting results as to the extent and amount of risk caused by such cognitive distraction (e.g., see 2). 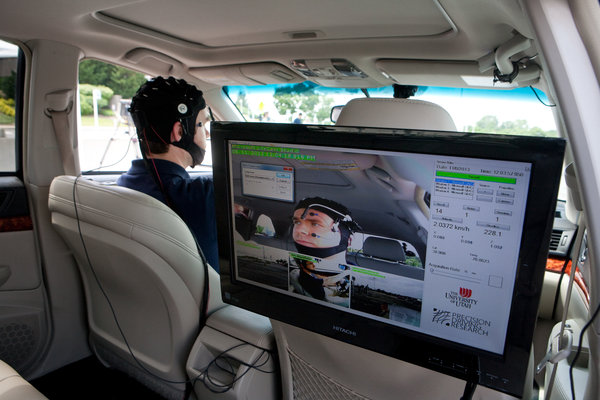 "A study released by AAA compared the impact on drivers of different activities, including listening to a book on tape or the radio, and talking on a phone."  Via New York Times (1)
Nevertheless, the true design question that needs to be asked his, how does one design voice based interaction technologies in a car to mitigate cognitive distractions? It has been known for some time, that on-board human-human communication (e.g., driver talking with co-passenger on the front seat) doesn't cause as much cognitive distraction. Because the passenger is cognizant of the traffic conditions (shared situation awareness; a.k.a., "mutual knowledge"* in the field of linguistic-pragmatics) -- and, thus, the driver's workload -- and may choose to pause or stop talking all together in heavy traffic conditions; likewise, the driver too may modulate his behavior by becoming silent because he knows that the passenger knows his mind is busy -- and, thus, may tolerate the period of driver going incommunicado.

Thus, in an era of AI and Machine Learning  would it not be possible to design on-board technology that perceives, acts and behaves like a fellow passenger who is cognizant of the driver's workload? In other words, a machine that practices a form of analytics and AI, where it predicts and intuits human / driver capabilities and limitations, based on his workload on the primary task (driving) moment by moment in real time -- and adapts its behavior (via the voice or graphical/physical human interface) accordingly.Thus making itself (pseudo) hyper-intuitive to the driver, resulting in an illusion as though it is reading his mind! We may even refer to this intelligent machine behavior as being facilitated via an Inverted Hyper-Intuitive User Interface.

A voice-activated technology (machine) endowed with "mutual knowledge" and shared situation awareness -- adapting itself and, thus, enhancing its usability via its Inverted Hyper-Intuitive User-Interface -- can go a long way in promoting safe driving outcomes.  Finally, the utilization and design of voice-activated technology should be carefully considered for police, emergency response and military vehicles, given the HighVelocityHumanFactors "HVHF" issues (high stakes, volatile, danger, stress-induced cognitive depletion) they encounter during their mission.

1(b) New York Time: Voice-Activated Technology Is Called Safety Risk for Drivers
(2) VTTI has produced several studies showing that talking on a cell phone while driving does not increase risk."