The Funneling and Tunneling of Attention: Human Interactions in Safety Critical Systems

Fragments of Attention: The Perils of Multitasking

Any man who can drive safely while kissing a pretty girl is simply not giving the kiss the attention it deserves.- Albert Einstein

Student and teenage drivers are often told, "keep your eyes on the road." Seasoned drivers are told "don't text or talk on the cellphone while driving." These admonitions are spot-on. In addition to this, one rarely hears someone telling drivers "pay attention to the road." After all what is the point of LOOKING but not SEEING? Meaning, that one should not only look at the road, but also cognitively register the stimuli (other cars, pedestrians, etc.) on the road, including their intentions, trajectories, unexpected appearances of new stimuli, etc.  Thus, a good driver has to monitor, by paying attention, to the present state of affairs on the road and the potential future. He must do all this, while simultaneously attending, albeit with automaticity (for the expert driver), to other driving tasks such as steering, keeping the gas pedal depressed; and, at times, to other undesirable secondary tasks like arguing with one's colleague on some abstruse or mundane topic. Say, about the Boson Higgs [God] particle or where to go for lunch.

The challenge posed by a modern automobile's cockpit, with its multitude of devices (GPS, Entertainment System, climate control, etc., Figure 1a) when combined with heavy traffic, and poor decision making of the driver (focusing on say, track selection on his music player rather than lane selection on the road), can result in adverse outcomes. Simply because there are limits to how many tasks one can do by dividing attention while driving. Findings from a recent study that report the perils of multitasking, texting while driving, provide further details about the limited bandwidth of dividing attention.

Figure 1a: The complexity of a  modern Automobile Cockpit has multiplied with the increase in a number of subsystems (GPS, climate control, etc.) that are unrelated to the primary task of driving

Flying a plane requires the pilot to both aviate and navigate at once. A pilot has to divide attention (scan) across six essential, primary flight instruments (Figure 1b) to keep the plane flying and heading in the right direction. This does not include chatting with the co-pilot or monitoring radio traffic or even engine parameters. The inherent task of flying an airplane fragments attention and test its limits.

So one needs to pay attention to Einstein's words (quote above), if one wishes not to crash the car, or its corollary, deliver and experience the pleasure of a quality kiss!

The "Spotlight" of Attention: when it holds and when it folds

To simplify the understanding of attention, it can be thought of a spotlight. Where the spotlight of attention is shined determines what we hear or see. Paying attention to what is being said by a man to the right of us at a cocktail party -- shining the "attentional" spot light on him -- may result in us ignoring what is being said by the lady on the left. This spotlight theory is true, until suddenly someone across the room utters our name in passing conversation. Our attention is now suddenly drawn to our name, because of the familiarity and emotional valence it has on us. This is known as the Cocktail Party Effect.

In dangerous and threat situations, our brain has been evolutionary wired to "preattentively" process negative information. Studies have shown that an angry face is spotted faster in a collection of happy faces, whereas the opposite, spotting a happy face in a collection of angry faces is much slower (Figure 2). 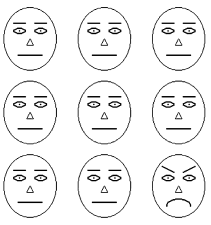 This subconscious spotlighting of attention is also revealed in what is referred to as the "Snake in the Grass Effect" by Prof. Joseph LeDoux. Say, you're walking in the woods and suddenly you feel something gliding past your shin. Your immediate response, even before you consciously could pay attention to the plausible cause, was most likely to recoil in shock.  Then look at the cause. Was it some thing dangerous (snake) or was it just a fallen branch? Our unconscious spotlight of attention, via our fear response (emotional brain) may have saved our life, if it happened to be a snake.

These types of biases (survival instinct) may sometimes prove to be fatal in high risk professions such as law enforcement and combat. One tends to have an implicit fear response, which may result in tragic consequences such as the shooting of Amadou Diallo, an innocent civilian, or fratricide (A-10 Thunderbolt, Air-to-Ground Friendly Fire incident in the Iraq war).

What is even more interesting is that the exteroceptive case may cut across sensory modalities. For instance, "looking" with one's eyes at the source of a sound may help us "hear" better and understand what is being said. For instance, we may have unconsciously stared at the speakers of a PA system, or the direction from which the sound is propagating, to hear better what is being said in a noisy airport. And sometimes looking at the speaker's lips can influence what we hear! Check out this illusion called the McGurk effect below

Communication and its comprehension (or the opposite, misunderstanding or mishearing) are key determinants when a a crew, squad or team have to succeed.  This can apply to say, an aircraft's cockpit, surgical theater, coal mine, or marine unit in the heat of urban combat. Poor communication skills and protocols or noisy radio links can result in dire outcomes or false alarms; as was the case with the latter when a false alarm was issued at a Shell refinery.

On 29 Dec 1972, Eastern Airlines L-1011 Flight had reached its destination, Miami, and was preparing to land. At that time, the crew encountered a problem with the landing gear and got preoccupied with troubleshooting it. The crew's attention was tunneled on the problem  and nobody noticed the gradual loss in altitude -- nobody paid attention to the altimeter -- and L-1011 crashed killing 101 of the 176 people on board.

Focusing of attention in a tunnel, without periodically scanning for what else might be going on in the environment, can be costly. Put another way, the tunneling and funneling of attention -- or switching of attention from focused to divided should be optimized to minimize error (Figure 3). 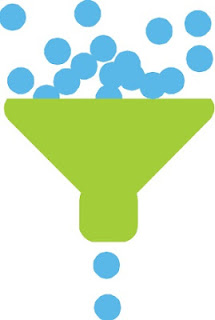 The pilot, soldier, police officer, fire fighter or surgeon -- or a tennis player -- should have a strategy to switch his attention from the funnel to the tunnel and vice versa. Obviously, this comes with experience. And system designers, can design the user interface of a cockpit or an infusion pump, to draw the attention of the human agent with proper enunciation (e.g., alarm) when attention has to be directed to it. (Poor design of multiple alarms in complex systems such as power plants, cockpits, or even cars, is another big problem that can contribute to accidents. This is referred to as the "Too much, too soon? or too little, too late?" problem.).

Sports too, and tennis in particular, demands strategic switching of attention between the tunnel and the funnel. The great maestro Roger Federer's visual attention (and by extension cognitive) is legendary and has been analyzed in-depth. For example, at the point of contact with the ball (exteroceptive attention; Figure 4), and the nonexteroceptive aspects of attention as to where to place the ball, what is the opponent's intent, reading the trajectory, speed, and spin of the ball, etc., are essential to win matches.

This posting just touched the tip of the iceberg with regards to attention. Research on attention has come a long way with increasing complexity of technology (air traffic control, cockpits, drones (UAVs), nuclear power plants, etc.). Dr. Christopher Wickens, Professor Emeritus @ University of Illinois, the doyen of cognitive/engineering psychology has enhanced our understanding of attention with his Models of Attention (multiple resource theory, SEEV), which are applied to design human-machine interfaces for complex technologies to exploit the innate strengths of human attention. I will discuss them in a future post.

But until then let us be cautious about our capacity to pay attention to a number of things at once, and wary about getting sucked into the funnel -- and then tunnel -- of attention never to switch back. The training of human agents (drivers, pilots, surgeons, police officers, fire fighters, process control operators, among others) and the design of technology to make it compatible with the predilection and capabilities of human attention are of great import that deserves GREAT ATTENTION.