We mourn the loss of 19 of the very best and brave wildland fire fighters, the Granite Mountain Hotshots*, at Yarnell Hill (Prescott), Arizona. As painful as this loss was, it behooves us, the scientific research community, to advance our understanding of fire science and fire fighter human factors to prevent such future tragedies.


*Hotshots are an elite group of wildland firefighters, with a demanding regimen of physical and fire science training. They carry around 40 - 50 lbs. of gear, food, water, fire shelters, etc., and are dropped-off as a small group, where they fight the fire on their own. For example, they create a fire line, by starving the fire of its fuel (getting rid of brush, dry chaparral, brittle oak brush etc.) to keep the fire from spreading. They have a lookout who observes the wind patterns, weather, progression of fire, etc., on the fireground in real time, to help the firefighters develop their strategy and tactics -- and keep them safe. (A video of the Granite Mountain Hotshots that was filmed in April 2012 is available below this article.) 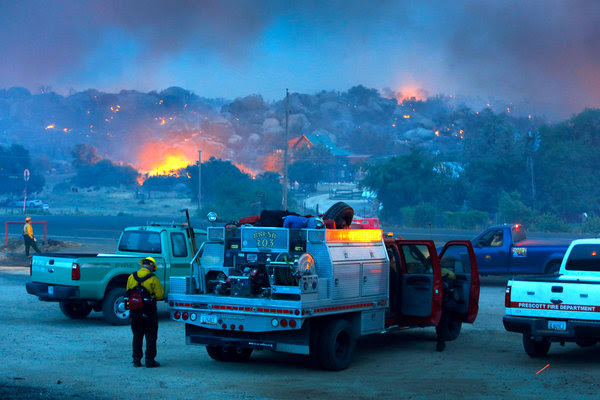 Started by a lightning strike on Friday, the fire spread to 8,000 acres. (Via NY Times)


Given the nature of the events at Yarnell Hill -- a burnover where the wind radically shifted suddenly and the flames changed direction without warning engulfing the Granite Mountain Hotshots -- posing the following research questions and finding answers may close the gap in our current knowledge on wildland firefighting. Thus enhancing risk assessment, situation awareness and decision making of firefighters and their commanders, supplemented with advances in communication, sensing and computing technologies that truly deliver utility, usability and safety to the crew on the fireground.

The above picture from AZCentral.com

Note the communication gear, the 2-way radio in front -- and inside the radio pocket -- of the harness on the Fire Jacket.

(Communication and Computing technology is discussed in the next bullet point)
"Rick Cowell, the 55-year-old superintendent of the Tahoe Hotshots, addressing his crew during the Stafford blaze." *Photographer:* Kyle Dickman  via Outside Magazine
Thus it is vital to formulate the right research questions, find answers in terms of training and technologies, to prevent future tragedies resulting from volatile, uncertain, complex and ambiguous factors, time stress -- that are inherent to wild land fire fighting.

This video of the Granite Mountain Hotshots was filmed in April 2012. Chillingly, it shows the crew practicing the deployment of their fire shelters (aluminum foil and silica sacks that reflect radiant heat). Prior to this tragic and wicked conflagration the Prescott Fire Department -Granite Mountain Interagency Hotshot Crew had never before been forced to deploy shelters in a fire. The LAST RESORT... Fire shelters have saved the lives of nearly 300 firefighters since 1977. Story credit: Stand with Arizona standwitharizona.com

Thanks to -- and via -- Brotherhood of Fire

Further Reading:
Outside Magazine, on being a Hotshot: IN THE LINE OF WILDFIRE

About the author:
Moin Rahman is a Principal Scientist at HVHF Sciences, LLC. He specializes in:
"Designing systems and solutions for human interactions when stakes are high, moments are fleeting and actions are critical."
http://hvhfsciences.com/
http://www.linkedin.com/in/moinrahman
E-mail: moin.rahman@hvhfsciences.com