Incisive Cognitive Analysis: Solving the Crime at Mile 26 of the Boston Marathon

It will be a long arduous recovery for victims, the kith and kin of those lost and injured in the heinous attack on civilians at Mile 26 of the Boston Marathon. Although, the people directly affected by this dastardly act will be scarred forever, human resilience is such they will recover in the fullness of time. Needless to say, the perpetrators will be found and justice will be served. It is just a matter of time. 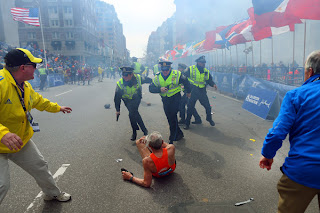 The rest of this post is to look at how this crime is being -- and will be -- solved by professionals in the FBI, law enforcement, and intelligence analysts. And how this effort will be aided by cognitive machine agents supplemented by the following:
SIGINT (Signal Intelligence; telecommunication chatter)
GEOINT (Geospatial Intelligence; satellite, photography, video, etc.)
MASINT (Measurement & Signal Intelligence; spectral analysis of bomb materials)
CYBINT (Cyber Intelligence; web chatter), and, of course,
HUMINT (Human Intelligence)

The (human and machine) "cognitive agents," in the intel domain, are chartered with the goal of transforming raw data into information into knowledge. The challenge here is not the paucity of data, but in fact too much data. Some data would be relevant providing diagnostic cues (e.g., bomb materials), and most of other types of data ranging from imagery (video footage) to social data (cyber, tips, leads, innuendos and conspiracies) maybe irrelevant. The lesser mortal would be overwhelmed, but it is unlikely to faze the professional criminologist and intel analyst who would expertly sift through the data until he homes-in on his quarry.

But how does s/he do it?

The intelligence analyst, just like a physician or an automotive mechanic, is a diagnostician.  But there are subtle differences. The latter (physician or a mechanic) diagnose problems that fall under the rubric of "deterministic causation"; because the cause and effect chain are enmeshed in physical systems such as, "hydraulic circuits," for example; which either carry blood or oil and could be contaminated by pathogens or detritus, respectively.  Whereas the intelligence analyst wrestles most often with problems in the "indeterministic causation" genre because it is a smart, thinking and reasoning human agent like himself is the root cause.  The problem space does not have a set piece architecture or consistently obeys laws of societal rules or reveals explicit causal chains.  Furthermore, the indeterminate nature is undergirded by the perpetrator's need to utilize guile, deceit, bluff and bluster as a means to his end of inflicting harm. Thus the problem is harder for the intelligence analyst as he has to "read" the (intelligent) mind of the perpetrator.

The problem of intelligence analysis is made both easier and difficult at once by machine agents and technological decision aids. It is compounded in our era of Big Data, given the volume, velocity and variability with which data flows causing an acute mismatch between the cognitive capacities of machine and human agents.

A machine agent is far-superior in trying to sift through these massive data sets consisting of phone calls, video feeds (facial analysis), web chatter, social media and the like. It might even be programmed to suggest plausible hypotheses, with an inference engine or Bayesian network model, by connecting the dots between people, events and objects.

A machine agent's cognitive abilities may be constrained. For instance, it may not be savvy about the importance of certain days (e.g., Patriot Day, Tax Day, Anniversaries, etc.), seasonal patterns, local moods, linguistic colloquialisms, etc. It maybe oblivious to novel patterns that fall outside the ambit of its algorithms.  A human agent is aware of such things but falls short in terms of the machine's appetite for almost limitless, brute computing.  Thus a well designed joint cognitive system, which brings these agents together in a symbiotic and synergistic partnership enhances analytical ability (machine) and intuitive acuity (human).


Naive observers, meaning us the public, are attracted to information that is explicit to the incident. The pain, the blood, the color of the smoke, the pandemonium -- and the information that gets played over and over again on TV. We anchor to that information, and, furthermore, they are made worse by our prejudices, fears, (in)group think, etc. An intel analyst must be indifferent to those elements (innate traits and externalities) to succeed. He may have to infer information that is NOT explicit, perhaps information that is unavailable, seek it with the aid of the machine agent, by exercising inductive logic; for example, query the machine to sift through massive linguistic data sets, which connects certain signal words such as "Boston" or "Marathon."  Or employ deductive logic by making inexplicit information, explicit, by forensic analysis, of say, the bomb material.

A human agent, with his expertise, intuition and social knowledge may provide the kind of insights the machine may lack. But the machine agent will more than make-up by sifting, analyzing and deducing to discover nuggets of knowledge from Terabytes of data that is beyond human abilities.

Solving a problem, whether it be in a criminal or clinical context requires a cold calculus (aka, cold cognition, rational thinking and analysis). But at the same time it should leverage "hot cognition" (emotionally charge cognition) vicariously to think like the adversary and glean his or her motivation and modus operandi to attack a target. And reverse engineer the chain, from effect-to-cause-to- (locating the) perpetrator.

The tools from criminology, forensic science and cognitive engineering are in place to apprehend the perpetrators who placed their bombs at Mile 26 of the Boston Marathon. We have a cadre of seasoned professionals at work on the problem.

Regardless of who the perpetrators are, be they domestic or foreign agents, local or transnational terrorists, a lone wolf or an intolerant hate group they will be brought to justice. It is just a matter of time.


Moin Rahman
Founder/Principal Scientist
HVHF Sciences, LLC
"Designing systems and solutions for human interactions when stakes are high, moments are fleeting and actions are critical."
http://hvhfsciences.com/
http://www.linkedin.com/in/moinrahman
Posted by Unknown at 9:50 AM